This reflection is taken from the content I am currently developing for the Welcoming Path formation program. It serves as an introduction to readings and discussions on Martha Nussbaum's Creating Capabilities: The Human Development Approach. I have edited it to be a stand alone piece here.
***
The Welcoming Path Formation Program is oriented around giving us concepts, skills, and tools that help us relate to our experience, and especially our efforts to bring about social change, in ways that are more sustainable, resilient, life-giving, wise, and kind. We began with reflexive practice - identifying our theories of change, looking and listening deeply to our experiences with the expectation to adapt our strategies to better meet our needs, creating communities where we expect to learn and grow together, and working together across personal, relational, structural, and cultural dimensions to make robust movements.

As part of the ACLU-Missouri's Transgender Education and Advocacy Program and the launch of the Trans Ally Toolkit, trans activists and organizers in Springfield were invited to join Jay-Marie Hill in hosting a Trans Demands event focused on Faith Spaces. It was a beautiful experience to join with others in planning the event, which took place on October 7, 2018. You can read more about the event at the Springfield News-Leader. As a former minister in a conservative Christian denomination, I was asked to speak to my experiences as a genderqueer person. Below is the main text of what I shared, lightly edited.

Here at the beginning, I want you to know that I am wonderfully happy about my gender and sexuality. I love – I really love – being genderqueer. I love belonging to the transgender family. I’ll be focusing on painful and difficult experiences this afternoon as we continue to call faith spaces to accountability, but I don’t want there to be any confusion. There is so much joy in my life. There are so many incredible, beautiful, fantastic people I’ve met and you are so important to me, and to our community. I am so grateful for the time and life we’ve shared together. I am so grateful for you. The joy and life and love we share are why I am willing to stand here and assert our humanity and speak what religious folk often call “a hard word.” I am angry, to be sure; but I am angry because all this suffering is unnecessary and cruel, and I am so exhausted from feeling and seeing my transgender siblings suffer so much. I hope that, in the anger, you also can hear this love.

To Suffer Is Not Enough: The Negativity Bias and Sustainable Activism

I delivered this talk at the Community Christian Church on September 30, 2018. It has been lightly edited.

I know it may be difficult to remember those now idyllic times before the endless news cycle revolved around the tweets of a certain horrible person turned celebrity turned president, but that world did exist. If you happened to love obscure news, you may have noticed a social experiment in December 2014. The City Reporter, a Russian news website, decided to publish only good news for one day. They teased the experiment by asking, “Do you feel like you are surrounded by negative information? You don't want to read the news in the morning? … Do you think good news is a myth? We'll try to prove the opposite tomorrow!” And they did. They featured positive headlines, like, "No disruption on the roads despite snow.” They made announcements of mundane progress, celebrating “that an underpass would be built in time … .”

The result was overwhelming, but not positive. The website lost about 2/3 of its readers that day. The deputy editor reflected, “We looked for positives in the day's news, and we think we found them, … . But it looks like almost nobody needs them." (https://www.bbc.com/news/blogs-news-from-elsewhere-30318261 ) There’s a popular narrative that news outlets drive negativity, that consumers are hungry for something positive but just can’t get it. The trouble was that, when The City Reporter went out of their way to report good news, the people went looking for bad news. 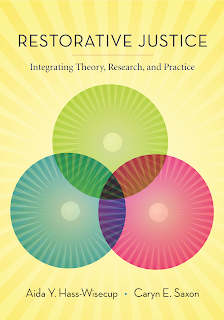 This work aims to "not only help educate people about restorative justice, but encourage others to reflect on what justice means to them and their community." (xix) Chapters include descriptions of the theories, history, values, and contexts that have informed restorative justice work, as well as processes and practices that are commonly utilized. These include: victim-offender mediation, family group conferencing, victim impact panels, peacemaking circles, and reparative boards. It concludes with a critical look at both pitfalls and limitations restorative justice practitioners have encountered, as well as the possible future for restorative processes.

Recognizing and Healing from Internalized Oppression and Dominance

I delivered this talk at the Community Christian Church on May 13, 2018. It has been lightly edited.

Last week, I shared some reflections on disability justice, in light of the recent legislative attacks on the Americans with Disabilities Act. Whenever I encounter unjust situations like this, whether it is disablism, racism, misogyny, gender and sexuality antagonisms, and the like, the question that tends to linger in my mind is – why in the world do we go along with this stuff? Horrible things are happening, we witness or hear about them, and, almost inevitably, someone is there to insist that it’s not that bad, that we’ve just misunderstood the situation, or that it has been worse in the past. It is as if, although oppression may exist, apparently oppressors do not. Do any of these sound familiar?

• “That was a long time ago; can’t you just get over it?”
• “Be patient with him; he’s just set in his ways, but he’s not a bad guy.”
• “You have to overlook some of what she says; she doesn’t mean it that way.”
• “Honestly, it’s not because of race; we decided to go in a different direction.”
• “Well, I don’t agree with how they treated you, but everyone has a right to their own opinion.”

And, perhaps most famously –

I delivered this talk at the Community Christian Church on May 6, 2018. It has been lightly edited.

Recent Attacks to the ADA and Accessibility

Unless you are involved in the disability justice movement, it is possible that you have never heard of HR 620, the ADA Education and Reform Act of 2017. The idea of pushing a bill that attacked the Americans with Disabilities Act was not new, having most recently been introduced in 2015, but past attempts didn’t get much traction. But in 2018, times have changed, and HR 620 got enough steam to attract 108 co-sponsors, including Missouri’s own Jason Smith (8th district in the southeast), Blaine Luetkemeyer (3rd district, which includes Jefferson City and St. Louis), and, of course, Billy Long (7th district, from right here in southwest Missouri). As Sara Novic with NBC News summed it up, “On Feb. 15, while the country had its eye on allegations of Russian election meddling and the senseless murder of 17 people in the Parkland school shooting, the House was quietly gutting the Americans With Disabilities Act, passing H.R. 620 with a vote of 225-192.” (https://www.nbcnews.com/think/opinion/gop-s-h-r-620-will-gut-americans-disabilities-act-ncna850261 )  The bill was received in the Senate on February 26, 2018.

Simplicity, Complicity, and the World We Are Creating

Last month, a talk I gave in January 2017 was included in a Best of the Left podcast, "#1173 Think transgenerationally, act simply (Culture and Environment)."  In light of its re-surfacing, I thought I'd share the text here, lightly edited, in honor of Earth Day.

I grew up in gardens, a jungle of string beans and tomato plants, peonies and lilacs.
The year could be marked by trips with my dad to buy seed potatoes and onion sets. I helped grandma pick grapes from the vine and watched for weeks in anticipation as she made wine that I was not allowed to touch. I can’t remember a year without the whistle of my mother’s canner or the slow simmer of a new batch of apple butter. And when we visited great-grandparents, we inevitably braved the briars to collect pails of blackberries and gooseberries, soon to be pies. It was natural to move between the gardens and our childhood games, back and forth. There was never any question for me of the connection between the soil and the plants and our own lives. Our health was bound up together. 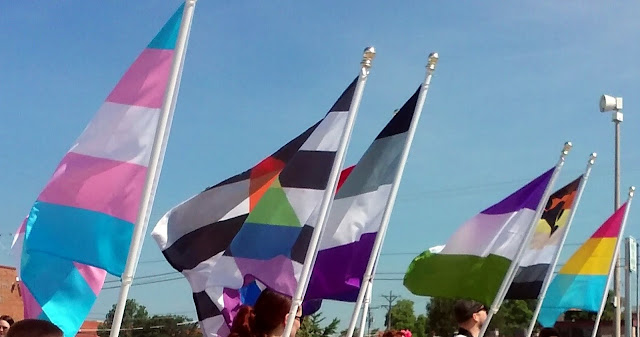 Thank you for your interest in the “Exploring Social & Interpersonal Conflict in the Lives of LGBTQIA+ and Polyamorous Persons” needs assessment!

By participating in this study, you will be helping us
For the purpose of this study, we are looking for participants who are 18+ years old to engage in an anonymous, online survey who:
-OR-
We estimate the survey will take 20 to 30 minutes to complete. You can find it online by CLICKING HERE [the study has now been closed]. Thank you for your participation!

If you have any questions or concerns about this study, please CONTACT US.

I helped design some reflexive activities for early childhood educators working with implicit bias, including these queries, which were meant to be used after watching a presentation by Dr. Walter Gilliam, embedded below.

1. What are your immediate reactions to the stories of implicit bias in the video?

2. What feelings and thoughts do you experience when you open up to the idea that you have implicit biases?

We Are Not the Fragile Ones

I delivered this talk on January 21, 2018, as part of a series of reflections on the public discourse and high profile cases involving sexual harassment and violence.

Despite the fact that I spend much of my time laughing, playing ridiculously silly games, singing my way through house work, and generally talking in funny voices, I am usually invited to talk about really serious topics. This morning is no exception, since I will be reflecting on the #MeToo movement, patriarchy, toxic masculinity, and my experience as a bi- or pansexual, demisexual, genderqueer person. I personally feel ambivalent about the opportunity: I’m grateful for the invitation and for the chance to speak about crucial issues; I’m also exhausted by the necessity of repeating how gender and sexuality have been weaponized against vulnerable people, including how speaking up too often makes folks targets of more coercion and violence. So here is my current best attempt to put it into words, a lot of words, that will include discussion of sexual harassment and violence, including rape, child abuse, and gender and sexuality antagonisms. I’ll also talk about the intersection of this kind of violence with disability, race, and class.

Meditation, From Attention to Socio-Affective and Cognitive Competencies

When it comes to meditation, a common emphasis in the mindfulness movement is on the cultivation of attention and concentration. These practices are often transformative in themselves and have been correlated with changes in the brain, especially in the cortex, which regulates executive functioning. This is certainly helpful, bearing benefits to both my well being in general and to my work in conflict transformation and community activism.

However, for those of us who are struggling with developing compassion or handling overwhelming emotions, it's important to note that these practices are not aimed at and do not produce increased skills in socio- affective and cognitive competencies. To build those skills, we need to widen our nets, considering reflective practices that we might not as readily associate with meditation.